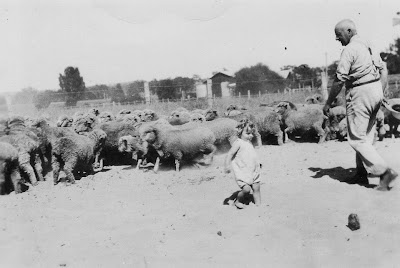 Uncle Tony Trumble has been mining the bottom of his cupboard in southern Tasmania. Here he is, circa 1932, with Uncle Arthur, one of our great-grandmother Campbell’s many Frew siblings. According to Uncle To, Uncle Arthur asked him to go in and bring him a baa. Tony marched in and attempted to do so. The baas were understandably startled, and Uncle Arthur had to go in and rescue him. This is what is happening in this action shot, presumably captured by Pa—evidence, perhaps, of the long Trumble tradition of capturing on camera moments of distress experienced by the children. I am rather taken by Uncle Arthur’s belt and braces, and that traditional stockman’s hat. Uncle Arthur’s property was at Binalong, near Coonabarabran, northeast of Dubbo in New South Wales. My grandparents drove all the way up there in the car they knew affectionately as Leaping Lena. Arthur Frew was a well known identity in the district, and gates to his memory were not long afterwards erected at the Binalong Show Grounds. In about 1939 the Coonabarabran Agricultural Society co-opted those gates for their own show grounds, but after the war Binalong demanded them back. Much later Uncle To investigated, and found them in a very diminished state. He dug up the committee and donated a couple of hundred dollars to get them fixed. It cost a great deal more than $200, but the Show Society generously paid the difference. I gather Uncle Alec has since called in to check up on them. Thus our footprint endures.
Posted by Angus Trumble at 7:31 AM