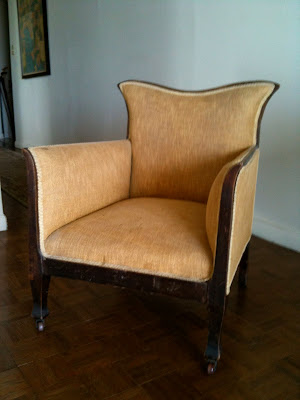 A few months ago, before my new book, The Finger: A Handbook, was published in New York by Farrar, Straus and Giroux, I inherited from my mother’s estate a handsome armchair. I have always liked the chair, but for some reason Mum didn’t. She banished it to a spot in the attic where it sat neglected for many years, exposed to the full sub-nuclear impact of the southern summer sun. When the chair arrived here in New Haven, Conn., I knew I needed to take radical steps to save it. This was merely a reflection of Mum’s own policy: Don’t replace any useful thing unless it cannot be repaired. Ironically, she made a lifetime’s habit of discarding certain irreplaceable things, which from time to time she assessed with an especially unsentimental, even coldly critical eye—above all teddy bears, and other stuffed toys (with some notable exceptions). 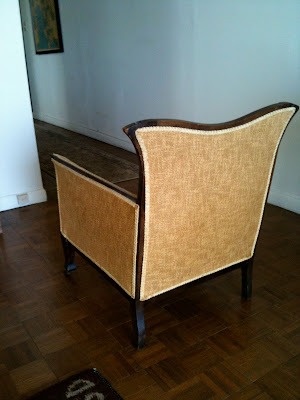 At first, to my colleague Patricia E. Kane, the senior furniture guru in the American Arts Department of the Yale University Art Gallery, I described the chair as “perhaps proto-modernist,” because what I remembered were the snappy lines and boxy shape; a certain elegance in the slightly unconventional, serpentine profile of the back and shoulder that is echoed in the outward flare of the arms. 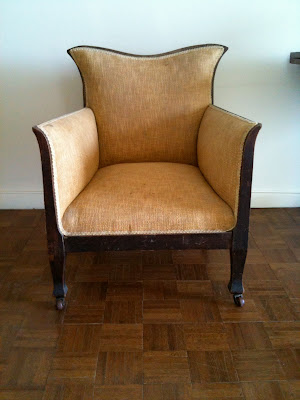 But when my chair finally arrived in late February (by cargo ship, all the way across the Pacific, and by transcontinental truck from Seattle, Wash.), I realized it was not really proto-modernist at all, but instead conventionally, even supremely Edwardian in flavor—most definitely not Victorian. It is the kind of chair you might reasonably expect to find in the front parlor of a spacious bungalow in the garden suburbs, circa 1912. I wondered if the Pearsons picked it up in England at around that date, perhaps for The Orchard at Chorleywood in Surrey, where they sat out World War I.

At Pat’s suggestion, I asked the excellent objects conservator Susan Holbrook, of the firm of Holbrook & Hawes L.L.C., in Bethany, Conn., to take charge. I was glad when at length she agreed to do so. I delivered it to Susan about a month ago, and the day before yesterday I went to pick it up again, and lob it on to the re-upholsterer. According to her meticulous report, “This is a small side chair fully upholstered on back and arms. The finish is dirty and degraded, and there are many small scratches and scuffs, with a few small chunks missing from the top.”

In due course, Susan removed the old fabric and interior cotton coverings and padding, leaving in place the original springs, the straps, and burlap. The padding was retained for possible re-use, or at least for matching the shape and volumes. She cleaned off the dirt and grime. Using ethanol and acetone on cotton rags, she removed the old, degraded finish. She checked for stability the broken parts, the loose elements, and the wobbly joins, and where necessary repaired them with hot animal-hide glue—completely indestructible.
Susan added screws to secure the arms. Using clamps and more hot animal-hide glue, she reset from its slumped position the seat rail on one side—this put me in mind of Uncle Henry. She repaired with wood epoxy resin larger areas of old damage to strengthen the joins, and then carefully toned or tinted them to match. She treated the wood with Danish rubbing oil, a preparation that usually has a linseed or tung oil base, and allowed it fully to cure.

Susan then applied a finish of three coats of dependable shellac, meticulously toned exactly to match the original. Finally, she rubbed the surface with microcrystalline wax, and polished it up to a high and splendiferous sheen. Overlooking no detail, finally Susan cleaned the sprightly casters supporting the front two feet, and thoughtfully coated them with more microcrystalline wax. They have never rolled more smoothly, quietly, or appealingly.

From Bethany I took the chair to Benny Becker of Norton Upholstery over on the Boston Post Road in West Haven, Conn. He’s so great: supremely businesslike, indeed quite obviously an artist of great professionalism. At length we chose from his stock of clean and judiciously preserved remnants a long-wearing, eucalyptussy, dry, greyish blue-green mohair velvet, which Pat reckons is the most historically harmonious fabric, together with a playfully inventive “gimp,” that is, the elaborately woven tape that is used to conceal the borders. This gimp is slenderer and finer than the old gimp, certainly fancy, but not at all vulgar. Happily, Benny’s arrangements will be historically accurate, and also suit my personal needs—if I can express it in that pert way. I look forward to introducing the world to my finished armchair in about a month’s time, and to sitting in it for many years to come.

But here’s the interesting part. By this half-way point, Susan was fairly sure that my chair was made in Australia, possibly using the glorious, dense, deep-red Western Australian timber called Jarrah. With exquisite tact she broke it to me that the chair was provincial (her word)—in other words not at all well-made (mine). This view she prudently omitted from her report, though she needn’t have. From my point of view this is really intriguing. The chair exhibits certain wholly charming oddities, such as glaringly mismatched rear legs (mismatched, that is, with each other), a detail that I never noticed. The original maker probably banked on that: Why bother to match two perfectly serviceable rear legs if they’re apprimately the right length and shape; will hold the thing up, and are knocking around the workshop, ready to go? It’s not as if anyone will be on their hands and knees inspecting the back or bottom of the bloody thing. (This practical outlook or frame of mind is supremely Australian, though clearly he did not anticipate the careful scrutiny of Holbrook & Hawes.) As well, there is that unmistakable clumsiness of internal construction that is the universal trademark of the journeyman carpenter, or even the layer of railway sleepers turned ad hoc colonial furniture-maker. None of this matters to me. Having previously liked the chair, now I just love it.

Anyhow, here is what Susan found down the side, irretrievably lost, deep down between the seat and the arms: 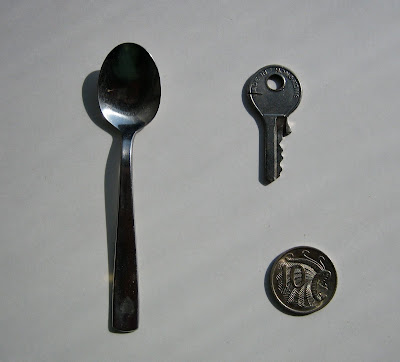 a little coffee spoon belonging to the set Mum and Dad acquired after their sterling silver flatware was in 1961 nicked from Nan and Pa’s house in Huntingtower Road, where ironically it was temporarily stored for safe-keeping; an Australian ten cent piece (dated 1979, reverse view with lyrebird); and a small key manufactured in Hong Kong—not, I suspect, the key to anything like a safe-house, letter, or bank security deposit box, but more probably the missing portion of a padlock. There is a single notch on it, so perhaps this was a spare key to the first sleep-out at Metung. More telling, however, was the discovery of two scraps of old newspaper from inside the stuffing of the seat—which also contains plentiful wads of coconut fiber, scraps of eccentrically garish material evidently swept off the floor of the upholsterer’s workshop, and other intriguing manavalums, about which I shall go into greater detail when I retrieve the rest of the stuffing from Benny, and analyze it further. 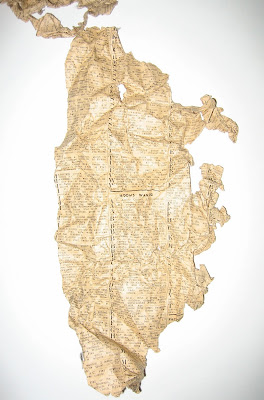 Now that most historical Australian newspapers have been digitized, thanks to the generosity and foresight of the National Library of Australia in Canberra, it is now possible (using a judicious combination of sufficiently unusual keywords) to trace in a matter of seconds those shreds of newspaper to the exact page of the very issue from which they came adrift, in this instance page 15/16 of The Age of Wednesday, February 2, 1949.

Now the wooden parts of my chair are certainly much older than that, so the most reasonable conclusion to be reached is that it was thoroughly renovated; re-upholstered in Melbourne, and maybe also re-covered some weeks or months after February 2, 1949. Therefore I’d say it was almost certainly a carefully thought-out wedding present for Mum and Dad, who got married in June.

Who gave the present? Certainly it could have been Gran, but if so I think that was a case of thoughtfully fixing up a neglected but useful item of furniture, and tossing it in with Helen’s trousseau. However, at that stage the Borthwick family still lived in Geelong. I suppose The Age was sold and distributed in Geelong, but a small voice in my head wants to say that your self-respecting local upholsterer—and at that time Geelong tradesmen were never more self-respecting—was more likely to have old copies of the Geelong Advertiser floating around his upstairs workroom in, say, Little Malop Street, and not a stray sheet from the late Sir Geoffrey Syme’s mouthpiece of the left-leaning masses who lurked sullenly in the dens and meeting-houses of that sinister metropolis forty-five miles to the northeast.

No, a firm-ish Melbourne provenance puts the Trumbles, Nan and Pa, more firmly in the frame. I suspect Nan was much more a soft-furnishings sort of mother-in-law—the grandmother, in due course, of generous second helpings, exciting wind-up toys, and other relatively harmless contraband. And in that case, she might have inherited the chair from her own parents, and maybe parked it in a spare bedroom at Huntingtower Road. My recollection is that she favored cosier, shapelier armchairs. The uncles may know; I must remember to ask them. 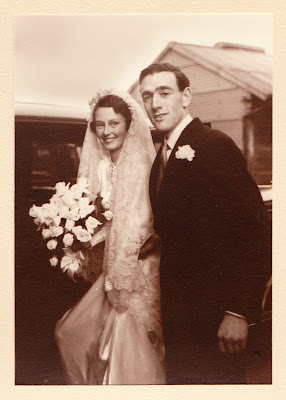 At any rate Peter and Helen have left us no other clues as to where my beautiful old armchair came from, but what a very handsome couple they were!
Posted by Angus Trumble at 8:09 AM