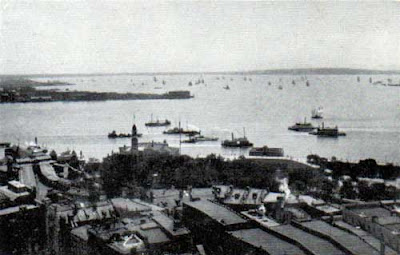 Calm motions are essential for the smooth running of a vice-regal establishment, and in this respect Norman was a model aide-de-camp, self-contained, efficient, and apparently unflappable. Even so, the events of the morning that culminated thus far in his interview with Lady Sutherland gave to Norman a sharp burst of forward propulsion.

Had one of the footmen seen Norman emerge from Lady Sutherland’s sitting room on the east front of Government House, descend the stairs, cross the hall, dart through the pantry door, trot down the back stairs, and head out along the path towards the mews, he might have paused to take note. However, that morning all three were distracted by preparations for the luncheon party, so Norman’s swift passage was observed only by Old Sock, who was working in the kitchen garden.

The climate of the island group of St. Edward is in any case benign, but that day was especially beautiful. The sun had risen over the Inner Thimbles shortly before half past six. It caressed those ships of the third squadron and flagship of the Indian Ocean fleet that just now lay at anchor in Victoria Sound. A faint breeze stirred the cypresses along the boundary with Bishopscourt, while Fort Borthwick and the naval observatory briefly cast their shadows over the pretty town and harbour of Palmerston below.

From the direction of the Customs House and Wellington Quay came the thrum and clangs of industry upon which the great wealth of the colony was lately founded—that is, the incessant loading of shipments of guano continually hauled from the Outer Thimbles in huge, flat-bottomed barges. Wisps of wood smoke ascended from the Chinese quarter and the Malay kampongs at the opposite edges of town, while cattle grazed peacefully on lush pastures belonging to the nearest and richest of the old estancias in the hinterland farther distant.

Over this charmed colonial estate His Excellency Lieutenant-General Sir George Sutherland, G.C.M.G., K.B.E., D.S.O., had presided as Governor and Commander-in-Chief since 1919. Far from raising eyebrows in the Colonial Office, Sir George’s appointment was greeted with enthusiasm in Whitehall, and much relief among the lower officials of Palmerston, because, it was felt, the government of St. Edward, New Scotland, and the Thimbles was by then far too complicated for an old gentleman as kind but vague as Sir George’s immediate predecessor, Sir Evelyn Broome. Guano and everything connected to it required a much firmer hand on the tiller, and whose could be more reliable than that of the hero of Beersheba? Such was the consensus of opinion all the way up to Cabinet, and even the Palace.

After the Secretary of State sounded him out during a lull in the Versailles Peace Conference, without hesitation Sir George confessed he had never heard of St. Edward, New Scotland, and the Thimbles. However, in due course, when properly briefed, he began to like the idea of taking up the reins of government. Naturally, the General would require a suitable household composed of existing and previous members of his personal and military staff. Yet initially Sir George and Lady Sutherland experienced some misgivings arising from a close reading of the relevant portion of the Colonial Office List.

“George. George,” said Lady Sutherland, over breakfast at the Ritz; Sir George was slightly deafened during the bombardment of Liège. “Listen to this: ‘ The islands of the St. Edward Group are said to be as numerous as the days of the year but not more than one hundred of them deserve the name. Most are mere rocks. Even of the three hundred thus far enumerated not more than fifteen or sixteen are inhabited, the remainder being flat and inconsequential.’ It sounds ghastly.”

“Yes,” said Sir George, returning to his newspaper. “Quite a bit of guano, though. Tons of it.”

In due course Lady Sutherland especially was partly swayed by reassuring accounts of polite and colonial Society, the surge of prosperity currently engulfing the local treasury and the Royal Bank of New Scotland, and, above all, a long article in the Illustrated London News about Government House, St. Edward, which was fairly described as “among the loveliest in the Empire.”

At length, together with their two unmarried daughters, Lettice and Marigold, and their staff, including Colonel Ernest Roberts, V.C., private secretary—who lost his right arm at Passchendaele—Lieutenant Norman Threlfall, R.N., aide-de-camp; Miss Lucy Edwards, secretary to Lady Sutherland; Dr. Henry Craddock, surgeon, and about fifteen others, including Foster, Sir George’s long-serving batman, in May 1919 the governor-designate sailed from Southampton aboard H.M.S. Fantome, reaching St. Edward via Cape Town and Mauritius in mid-July.

Nearly three years on, it was as if Sir George and Lady Sutherland had been en poste for thirty.

By then, as a matter of natural progression, Foster, formerly of the Coldstream Guards, had been entrusted with the care, maintenance, and operation of the Governor’s stately and enormous vice-regal motor car, an extravagant purchase proudly made by the legislative council of St. Edward not long before His Excellency’s arrival. Hitherto nothing so remotely unusual as a headless torso wrapped in a lady’s foundation garment had ever turned up in the rear compartment.