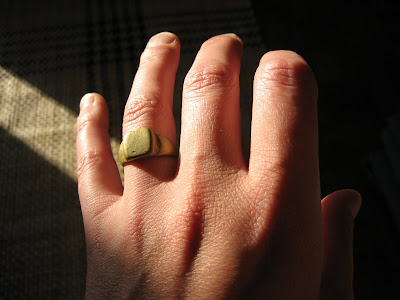 I think Uncle John would have enjoyed The Finger: A Handbook, just as he got a big kick out of A Brief History of the Smile. During the 1970s, when he worked for Roy Barling as an antique dealer in Mount Street, Mayfair, Uncle John made occasional purchases of modest Greek and Roman antiquities from the Astarte Gallery in Grosvenor Square, long before they went exclusively on-line. He sold most of them before he died, but about fifteen years ago Uncle John gave me this rather fetching ring, ostensibly late Roman. The gesture was characteristically generous. He had polished it up to a burnished splendor, and it looked remarkably like gold—but since then it has tarnished into the unavoidable reality of brass, and why would any self-respecting Roman goldsmith create a signet ring out of brass? In this instance, the “late” in “late Roman,” is I suspect nearer to 1958 than A.D. 458, but fortunately I am very interested in fakes, so I wear it occasionally with some amusement, thinking of Uncle John busying himself at the kitchen table with a bottle of Brasso and an old duster. Naturally it causes some confusion, because the only finger I can wear it on is the ring, and alas there’s absolutely no significance there, and never has been—although I live in hope. Anyhow, ancient jewels, whether genuine or not, make a special claim upon our attention. Prized by a savage creditor from the fat finger of some failed Levantine merchant? Stolen from the sarcophagus of a Roman matron? Exchanged for a handsome slave—a body servant, perhaps—in the old market at Damascus? Won by an Egyptian courtesan in a crooked game of dice? Or lately hammered out (along with 150 others) by a Neapolitan racketeer with solid connections in Zurich, and a battered vespa? It doesn’t really matter to me personally, and fortunately my art museum is not in the dodgy business of Greek and Roman antiquities. And nor was Uncle John. His special province was medieval French, German, and Spanish furniture and objets d’art. For many years the Begum Aga Khan asked him to select a suitable Christmas present for her husband Those objects were destined for their house in Paris. I imagine most of them are still there, reflecting John Borthwick’s exquisitely monkish taste. I’m sorry I never asked him why on earth the Aga Khan observed or even acknowledged Christmas. The first Begum was actually an Englishwoman; I suppose that is the reason.

Posted by Angus Trumble at 7:13 AM