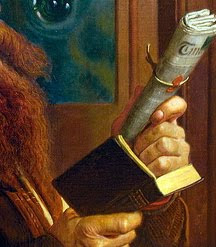 Most authors run the risk of tackling a subtopic in far greater detail than is necessary, and need to be rescued from that hazardous path by sensible commissioning and copy editors. I am no different. My new book The Finger: A Handbook has just been published in New York by Farrar, Straus and Giroux, and one of the sections of which I am proudest deals with the baffling Victorian taste for “filbert nails.” Eventually I cracked that nut, but not before the following, scarifying newspaper article joined a fairly large amount of comparable material on the cutting-room floor. This one was printed in the Hobart Mercury on Wednesday morning, September 30, 1874, and was syndicated a few weeks later in the expedient Brisbane Courier:

INDEX OF A GENTLEMAN.—Lord Byron proposed to recognize a patrician by the delicate conformation of his hands and the evidence of breeding in his well-kept filbert nails. Nothing can be more opposite in character than the nervous fingers of the stonemason and the soft hand and small, weak-looking nails of the linen-draper. And, as illustrating how intelligently observant is the Australian native race, a friend has communicated the following to me:—He was travelling, more than twenty years ago, in the Western District [of Victoria], and came upon an encampment of blacks. As he approached them a horseman rode off in an opposite direction. Asking who had left the camp, the darkies shook their heads, exclaiming “No know.” He was surprised that they didn’t know, as a blackfellow usually knows everyone within fifty miles. Said my informant, “Was he a gentleman?” “No, no,” they shouted emphatically, holding up their hands by way of exemplification. “No gentleman—too much dirt ’long a nail.” So that the observation of the unsophisticated child of nature and the deduction of the aristocratic peer and poet, did not differ much.

From this strange anecdote I never managed to find my way to the relevant spot in Byron (if indeed it exists). Nor could I imagine how the author conjured those strange images of an agitated colonial stonemason and a stunted linen-draper, or ever reach the conclusion that filbert nails were relaxed (or at least not “nervous”); firm or especially strong (not “soft”); large (not “small”), or by definition free of dirt—and that through some combination of all these qualities the filbert nail therefore denoted high birth. The issue of filberts was one of shape, after all, not mood, size, or particular cleanliness.

A separate point that was entirely lost on the author but nevertheless deserves to be noted is that by the mid-1850s, Western District Aborigines—maybe the allied Jardwadjali and Djab Wurrung peoples of the Wimmera—were politically astute and, I suspect, rather clever, in other words well able to steer a difficult course between the potentially conflicting claims of rival squatters, all of whom were armed to the teeth, exceedingly dangerous, and, as far as “the unsophisticated child of nature” was concerned, wholly without scruple.