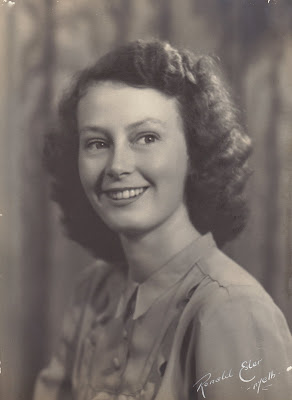 Among the many papers she left behind there is a sheaf of wonderful letters that Mum wrote to her sister Anne, who sailed to England at the end of 1948 and stayed there for several years. Presumably Uncle Henry returned them to Mum some time after Aunt Anne died in 1986. They are mostly addressed to “Dear Anna” or “Dear Girlie,” and, though very youthful (and sprinkled with exclamation marks), Mum’s voice, cheery cadence, buoyant in-house lingo, and neat hand are all instantly recognizable. One will have to do for now. This was written about a month before Mum and Dad’s wedding in Melbourne on June 9, 1949. Her future father-in-law “Mr. Trumble” was evidently in London on Privy Council business, and among the many hints of post-war austerity there is a tacit acknowlegement that the basic standard of living was higher in Australia than in England; are the meals “O.K. by our standards?” she asks.

There are no flimseys so I’ll have to write per ornery mail which is too expensive really, but seeing as I can probably get someone else to post & pay for this, it doesn’t matter much. Aren’t I dreadful?

We got a slasho letter from you today. London sounds marvelous and all the tripping about you’re doing! Fancy! Madame Tussaud’s, Ralph Richardson, Scotland, Dublin and Paris! Fancy! Gosh it’s a real thrill to think of such cosmopolities. And a cigarette holder! And being brave enough to pretend you wanted to buy a suit in Bond St! And being able to find your way about with such great ease! And getting yourself a marvelous job! Gosh! Wacko! Any day now Mr. Trumble will be contacting you if he hasn’t already as he flew over last week and is in London now.

Gosh the tatted mats (or are they by now matted tats?) sound beaut. Don’t go leaving them on train or bus or in the ladies’ will you? How is Liz? Have you seen any of the royal family yet, talking of Liz? Give the baby [Prince Charles] a oogly poogly from a loyal subject from Wallaby Land (me) will you?

The weather has been very muggy for a week after the very heavy rain we’ve had. I’ve never sweated so much as I did yesterday, it was like a Turkish bath. Poor Mum had to come down from Melb. in David’s car with him, two kids and dog.

Since you went away, Dad has only told his story about the little hole in the wall shop with the red-haired saleswoman and the black child and the Armenian hubby—once, but we haven’t had very many visitors. Ramsy Cook is here with his little boy this arvo, so the story may come up yet.

In a few weeks’ time I have to have my wisdom teeth out at Kardinia house. Dr. Goody Good’s successor Mr. Renowden is going to have a finger in the pie. I wonder what he’ll look like.

Fancy meeting that Barbara Godby, is that her name? Isn’t she the one whose mother said she and the Duke of Edinburgh had had a boy and girl affair or some such, when the D. of E. was Prince P. of G. and was calling in at Fremantle? I remember meeting her with you once on the Toorak tram with Anne Maudsley, a big blowsy girl in a floral cap-sleeved silk dress and white hat with plenty of veiling (Not Anne Maudsley, but B. G.).

In a minute must go and comb out my Marcel wave (washed hair this ming) and join our young guests in the parlour. They seem to be behaving nicely and can hear the menfolk talking their heads off so I suppose Mum and Jeanie [Borthwick] are demurely tucked away with their needlework in a corner.

After lengthy calculations which are already up the pole my wedding day has been fixed for June 9th. We approached Heather Moreton, Cherrie Borthwick, Angela Salmon and young Janet [Borthwick] with a view to being bridesmaids and they all seem quite pleased, though I think their Mums are getting more of a kick out of it than they are and Auntie Mer Mer [Meryl Borthwick] is in a frenzy of delight. Gosh she’s a bird.

Well must be off to make tea for the gang. There’s nothing much to eat and I don’t know what to do. What is the food like in England or rather where you are? You haven’t said except that you’ve been out to quite a few meals so far. Are they O.K. by our standards? We all feel a bit greedy when wolfing some specially nice delectable and wish we could send you an elping.

Lots of cheese from Helen