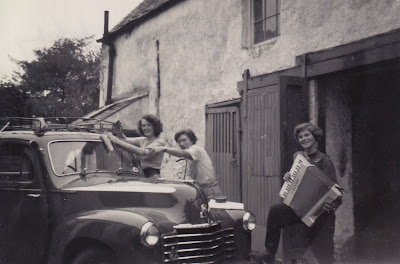 In the autumn of the first or possibly the second year she spent in England, Aunt Anne went with her Australian girlfriends on a long trip by car through France, across the Pyrenees into Spain, and back again; up into the Swiss alps for skiing at Saint-Cergue in the Jura, Lucerne, and La Cure in the Franche-Comté, and thence across into Italy via Como, Bellagio, Lago Maggiore, Milan, Verona, Venice, Ravenna, Florence, Pisa, Rome, Monte Cassino, Naples, Sorrento, Capri, and back again via Termoli in the Molise on the Adriatic coast. This is “Jenny Linden [right], Nipper [middle] and me [left] polishing the car in the yard at Ardura,” in northern Spain. (Note the hearty piano accordion.) As well as reflecting the far better climate, the photographs begin to radiate a new sense of fun, as well as of relaxation, even languor. 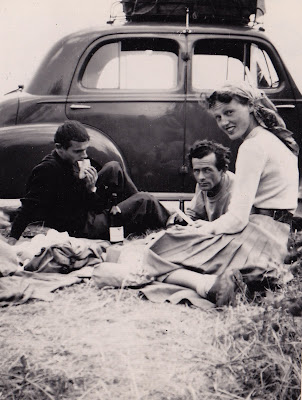 Among the party of at least six, two traveling companions jostle for prominence in the photographs, “André” and “David.” Here, for example, is “Picnic lunch. André [left], David [middle] and Gypsy Rose Lee [as Anne describes herself] with the car in the background,” and a faint reflection in the beautifully polished rear door of Nipper, who took the shot. 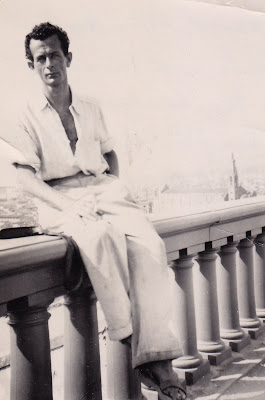 Here is “David looking Rather Arty, with Florence in the background, taken from the Piazzale Michelangelo.” 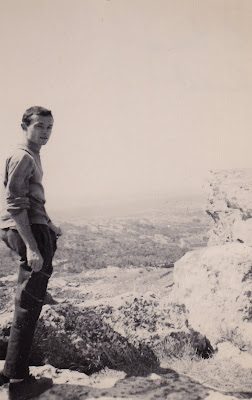 And here is André at Les Baux-de-Provence in the Bouches-du-Rhône, near Aix, 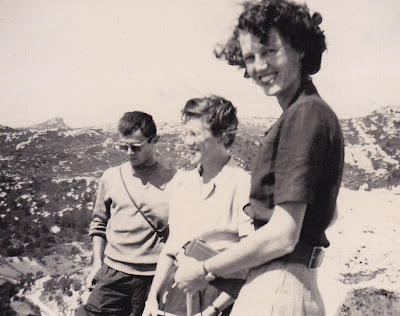 and again, with Nipper in the middle and Anne on the right, never more relaxed or radiant. Note the elegant rear-buckling belt, and brilliant figure. 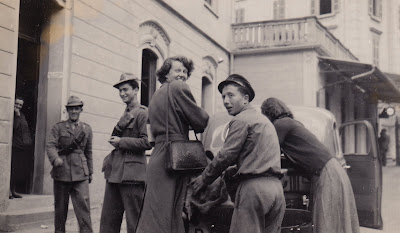 Crossing the frontier between Switzerland and Italy a few miles northwest of Como involved the usual flirtation with Italian customs, and a cheerful detachment of “alpini.” 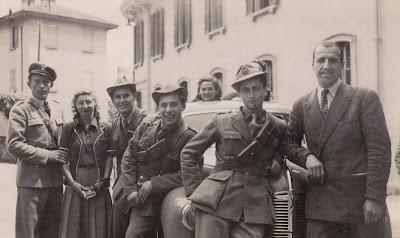 Anne wrote on the back of this one: “This is us fraternizing like mad with the Italian customs at a place called Maslianico. The top of my head just visible behind the gent leaning negligently on the bonnet.” 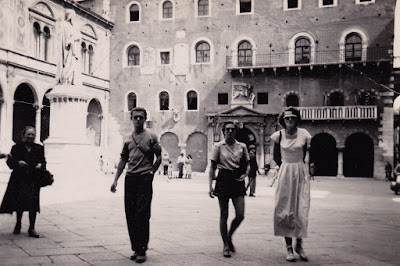 Anne again: “Piazza del Dante or something, Verona. [in fact the Piazza dei Signori, with the last few bays of the Loggia del Consiglio, and the famous statue of Dante Alighieri in the background on the left]. André, Nipper, and me, and one of the locals seems to have got in too. N.B. the new sandals. (This outfit is my Scala Theatre (Milan) opera-going one, with all the diamond tiaras and furs.”
Posted by Angus Trumble at 9:13 AM