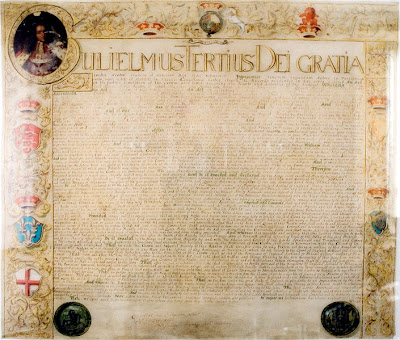 This week, in fact on ANZAC Day, the Queen gave her assent to the Succession to the Crown Act 2013, which will come into effect once it has been formally agreed to by all of Her Majesty’s other fifteen Commonwealth realms. This is an important milestone in British history, because it overturns several of the most important provisions of the Act of Settlement 1701, and indeed negates its primary purpose. That extraordinarily durable piece of legislation was prompted by the crisis arising from the melancholy inability of successive protestant Stuart sovereigns, all grandchildren of King Charles I (viz. Queen Mary II and King William III, first cousins who reigned jointly as husband and wife, and Mary’s younger sister Queen Anne) to produce any children who survived childhood, and a determination permanently to exclude Roman Catholics from the line of succession. In 1701 a daunting array of cheerfully fertile and rapidly multiplying catholic descendants of Charles I and Henrietta Maria stood between the ailing and lately childless Queen Anne and the nearest generally acceptable Protestant candidate. This impressive person, Sophia, Electress of Hanover, was a granddaughter of King James I, and the youngest survivor of the many children of King James’s daughter Princess Elizabeth, sometime Queen of Bohemia (also known as “the Winter Queen”). People with vivid memories of the English Civil War would have been very much aware that one of Sophia’s much older brothers, Prince Rupert of the Rhine, had been one of King Charles’s most trusted generals on the losing side. Fifty years later, it was estimated that approximately 50 princes would have had a stronger claim to the thrones of England and Scotland than Sophia had they not been catholic, or in some other fundamental sense politically undesirable. The Act of Settlement 1701 nevertheless provided that the throne would pass to Sophia and her descendants, but only if they were not catholic and/or not married to one. The Act made a number of further constitutional provisions which were to come into effect after Queen Anne’s death, but the most important consequence addressed by the British Parliament this week was actually unintended. It would not, I think, have occurred to anyone in 1701 that Protestant princes would not automatically supersede older Protestant princess-siblings in the line of succession, but until this week that is exactly what has happened. The current Princess Royal is older than the Duke of York and the Earl of Wessex, but she and her children nevertheless follow them (and theirs) in the present line of succession. Since 1701 only two princesses have ascended the throne, and that is because they lacked any male siblings: first Queen Victoria in 1837, and the present sovereign in 1952. However, in future the eldest child of the present Duke and Duchess of Cambridge will accede regardless of his or her gender, and/or that of any of his or her younger siblings. He or she may now also be catholic and/or married to one. Had the issue of gender been a primary consideration in 1701, or even only a secondary one, the Act of Settlement would have seemed far more desperate than it actually was, in other words going so far as to alight upon the youngest of the five daughters of the only sister of King Charles I. In the end, Sophia died in Germany a matter of three weeks before Anne, so the throne duly went to her eldest son, who reigned rather grumpily as King George I. It is also worth pointing out that notwithstanding its grim sectarian rationale, the Act of Settlement 1701 actually served Britain remarkably well. Except for purely domestic arrangements, the Hanoverian century and a half was remarkably stable compared with the constitutional crisis and successive after-shocks of the preceding Stuart century. What is most unclear in the present legislation is how at length it will affect issues of governance in the Anglican Communion, for it now seems theoretically possible for a catholic sovereign some day to find him or herself in the distinctly strange position of being both “Defender of the Faith” (which faith?) and ipso facto supreme governor of the Church of England. No doubt the British knack for constitutional reform will enable Parliament to settle upon a viable solution to this problem well ahead of time, but I suppose there are no absolute guarantees of that.
Posted by Angus Trumble at 9:04 AM