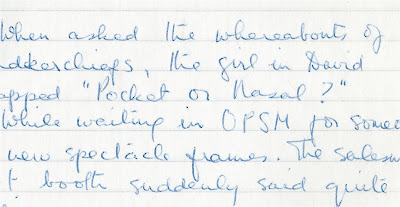 Today I made a sudden discovery, that stopped me in my tracks and took my breath away. Nothing especially major, but it was as if I was hearing her voice. On May 19, 1992, Mum turned her notebook upside down, and started writing. I have never before noticed the resulting page and a half because of course until now they remained hidden at the very back, and the book is otherwise less than half filled.

Anne’s birthday. I have just read Hazel Holt’s biography of Barbara Pym which I enjoyed v. much. She says that B. P. always kept a notebook & jotted down all the funny/peculiar things she heard as she went about her life. This got me thinking & I realized I had heard/seen three strange things today & one the last time I went to the Prahran Market, viz. two women looking in the wondow of the chicken shop in the meat arcade—“I’m not a pie person.” Today. 1. When asked the whereabouts of men’s handkerchiefs, the girl in David Jones snapped “Pocket or Nasal?” 2. While waiting at the OPSM for someone to sell me new spectacle frames. The salesman in the next booth suddenly said quite loudly, “Wine, Women, and Song, and a good sex life…” Didn’t hear the rest, but he sold the customer several frames including wraparounds for skiing. When the customer walked out past me he was such an ordinary looking chap. I do hope his new specs fulfill his dreams. 3. Driving in Glenferrie Road I saw a small old woman in a battered straw hat & man’s raincoat carrying an enormous toy rabbit—nearly as big as she was. It was dressed, more warmly than she, in a fisherman’s white jersey & waterproof jacket (human sized). She was obviously nearly exhausted—the rabbit kept slipping & she was trying to use her umbrella without dropping everything. Where on earth was she taking it?

“Pocket or Nasal?” is even better with a broad Australian accent, but I too was unaware of the existence of any such distinction. Mum could be so wonderfully, sublimely funny.
Posted by Angus Trumble at 1:33 PM