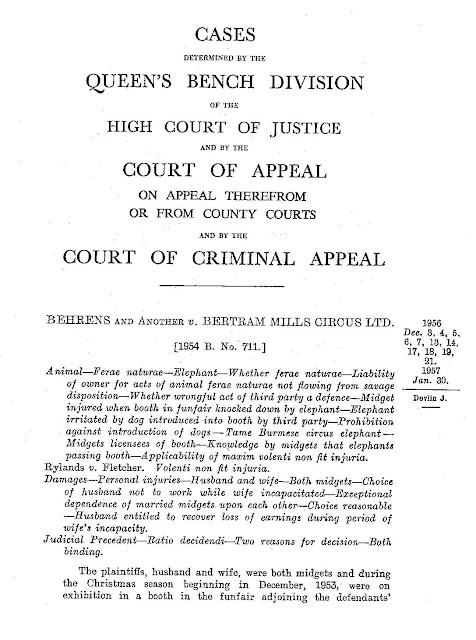 The majesty of the law can, at times, strike one as not all that majestic, as, for example, in this opening page that begins to set out the case of Behrens and another v. Bertram Mills Circus, Ltd., which was decided on appeal by Mr. Justice Devlin of the Queen’s Bench Division of the High Court of Justice, the Court of Appeal, and the Court of Criminal Appeal as recently as January 1957. No doubt the language reflects a degree of exactness and jurisprudential clarity—including the invocation of Latin maxims: Ferae naturae = untamed or wild by nature (elephant); Volenti non fit injuria = to a willing person no wrong is done (midgets); Ratio decidendi = the reason for deciding (based on precedent)—but what were Bertram Mills Circus, Ltd., doing exhibiting these otherwise unnamed midgets (husband and wife, Mr. and Mrs. Behrens) during the Christmas holiday season of 1953, and in a booth that was evidently in such potentially dangerous proximity to a Burmese elephant (dog or no dog)? Still, I suppose Legem non habentis ipsi sibi sunt lex—Those who do not have the law are a law unto themselves (Romans 2:14), but still it seems unfair that the Behrenses should have been in effect obliged to exhibit themselves as licensees of the booth, and under what would appear to have been such inadequate contractual arrangements.
Posted by Angus Trumble at 9:28 AM