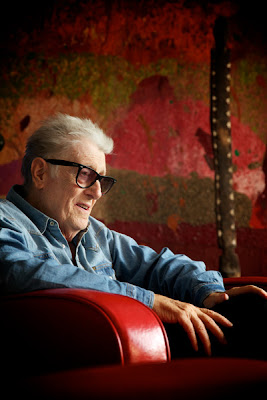 On behalf of the director, Amy Meyers, and the whole staff of the Yale Center for British Art in New Haven, Connecticut, I come this morning as an emissary to pay our tribute to John Hoyland. We mourn the loss of such a distinguished Royal Academician, and, of course, we pay our respects to Beverley, to Jeremy, and to their family and many friends and colleagues. Last autumn John’s work was seen in abundance at Yale thanks to the generosity of Mr. and Mrs. Samuel Lurie, who have for decades supported John, and acquired a great deal of his work. We were delighted not only that John and Beverley were with us then, and gave so generously of their time, above all for our students—he really was a trooper—but also that John was able to know and derive satisfaction from the decision reached by Mr. and Mrs. Lurie to present to Yale their entire collection of his work. John has been a presence in the United States since the mid-1960s when in New York he attained the recognition of the powerful critic Clement Greenberg—not, I think, an easy feat because with that recognition Greenberg was famously parsimonious—but thanks to this remarkable gift henceforth John will remain powerfully present with us for as long as earthly things endure. And for that we give hearty thanks.

As the Rector pointed out in the beginning, light is at the heart of the Judaeo-Christian tradition, and there can be no color without light. If poetry is music set to words, as a colleague of mine suggested lately, then great paintings may be, can be, poems wrought by color. No doubt they are many other things too, but John’s work surely brings us in that direction. The death of a major painter, and a colorist as dazzling as he was, inevitably makes us wonder where that light came from, and what it means for talented individuals to harness and share it for the benefit of all who care to look. Though John has gone, the colors remain, reflecting the light—the sunlight of the Mediterranean and of tropical places: Jamaica and the waters of the Caribbean; the lush green hills of Bali; even the ocean beaches of southeastern Australia. But in a larger sense John’s work, his legacy, surely hints at what in this great parish church we call light perpetual. May it shine upon him.