The hyacinthine colour of the distance 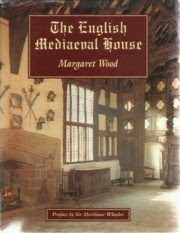 I am a sucker for Edwardian sentiment, and apparently so too was Margaret Wood, author of The English Mediaeval House (1964), which I have been re-reading lately. Something of her character is conveyed on the title page where, without false modesty but at the same time nodding toward old manners, she is “MARGARET WOOD, M.A., D.LIT., F.S.A. (MRS. E. G. KAINES-THOMAS),” while the hearty, public school-leaning dedication is simply “To K-T.” However, it was by the long epigraph that I was captivated in bed this morning—a passage from the novel Precious Bane (1924), by Mary Webb:

To conjure, even for a moment, the wistfulness which is the past is like trying to gather in one’s arms the hyacinthine colour of the distance. But if it is once achieved, what sweetness!—like the gentle, fugitive fragrance of spring flowers, dried with bergamot and bay. How the tears will spring in the reading of some old parchment—“to my dear child, my tablets and my ring”—or of yellow letters, with the love still fresh and fair in them though the ink is faded—“and so good night, my dearest heart, and God send you happy.” That vivid present of theirs, how faint it grows. The past is only the present become invisible and mute; and because it is invisible and mute, its memoried glances and its murmurs are infinitely precious. We are tomorrow’s past. Even now we slip away like those pictures painted on the moving dials of antique clocks—a ship, a cottage, sun and moon, a nosegay. The dial turns, the ship rides up and sinks again, the yellow painted sun has set, and we that were the new things, gather magic as we go.

Precious Bane is set in Shropshire shortly after the Napoleonic wars, and concerns two parallel love stories, that of Prue Sarn, the narrator, who because she has a disfiguring harelip cannot believe that she is worthy of the wholesome weaver Kester Woodseaves, who perceives the innate beauty of her character, and that of Prue’s brother Gideon whose determination to marry his sweetheart, Jancis, is fatally sabotaged by lust for money and power. The title comes from Milton: “... Let none admire / That riches grow in Hell; that Soyle may best / Deserve the pretious bane. ...” (Paradise Lost, I: 690–92, i.e. money is the root of all evil, viz. bane, or poison). Incidentally, “to my dear child, my tablets and my ring,” clearly evokes a mother’s last will and testament, but those tablets were old-fashioned items of jewellery, not medicine. Precious Bane earned Mary Webb the Prix Femina Vie Heureuse, and also the admiration of Prime Minister Stanley Baldwin, but it is also typical of the kind of post-War, primitive-England, “loam and lovechild” writing that Stella Gibbons parodied so brilliantly in her Cold Comfort Farm (1932)—I read that again too not long ago. But what about that passage to which Margaret Wood, a disciple of Sir Mortimer Wheeler, so extravagantly directed her readers at the beginning of The English Mediaeval House? Well, I think it’s rather simple. Surely you can only fully grasp what Mary Webb has to say about trying to gather in your arms the hyacinthine colour of the distance, or indeed measure the sweetness of the gentle fugitive fragrance of spring flowers dried with bergamot and bay, once you have arrived comfortably at middle age—or if, over the years, you have kept enough letters that were written in blue ink that is rapidly fading. And it all lines up perfectly with the Edwardian cult of paleness, which was surely what Yeats had in mind, or something very similar, when, in a review of the play Ubu Roi (1896) by Alfred Jarry, he remarked: “After Stéphane Mallarmé, after Paul Verlaine, after Gustave Moreau, after Puvis de Chavannes, after our own verse, after all our subtle colour and nervous rhythm, after the faint mixed tints of Conder, what more is possible? After us the Savage God.” In this world of unstoppable email and limitless terror, you can only conclude that he was onto something; Margaret Wood knew what Mary Webb was talking about, and for all their damaging imperial jingo the Edwardians had exactly the right idea about what really matters.

Posted by Angus Trumble at 4:08 PM