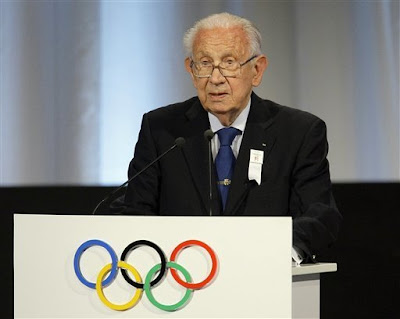 Those who say that President Barack Obama’s standing in the world has been damaged by the decision of the International Olympic Committee to eliminate Chicago, Illinois, at the earliest opportunity and to award the games of the XXXI Olympiad of the modern era to Rio de Janeiro would do well to look a little closer at the composition of that unsavory organization.

No fewer than twenty members of the I.O.C., between a sixth and a fifth of the entire membership, were not long ago found to have accepted bribes. But even if they hadn’t, the inexact process of assessing at first hand the rival bids of many cities all over the world has for years constituted an especially disgusting gravy train—an unending palanquinade of lavish official hospitalities, institutionalized obsequiousness, and plain, old-fashioned corruption.

As if to underline its far right-wing credentials, the I.O.C.’s honorary president for life, the diminutive Marquis of Samaranch, was a minister of state in the fascist régime of Generalissimo Francisco Franco. By coincidence the Marquis’s son and namesake now also sits on the I.O.C.

The organization, based in Switzerland—where else?—has a particular fondness for European and petrodollar royalty, and one might ask what collective skills are brought to the task of allotting without bias immense sporting fixtures to whole nations by such luminaries as H.S.H. Princess Nora of Liechtenstein; H.S.H. the Sovereign Prince Albert II of Monaco; Sheikh Ahmad al Fahad al Sabah of Kuwait; H.R.H. the Grand Duke of Luxembourg; H.R.H. the Prince of Orange; H.R.H. Prince Nawaf Faisal Fahd Abdulaziz of Saudi Arabia; H.R.H. Prince Tamim bin al Thani of Qatar; H.R.H. Prince Tunku Imran of Malaysia; H.R.H. Princess Haya Bint al Hussein of the United Arab Emirates; H.M. ex-King Constantine of the Hellenes, or H.R.H. the Infanta Doña Pilar de Borbón of Spain.

To be fair, a good number of these persons were once good at riding horses, shooting guns, sailing yachts, and/or participating in bobsleigh competitions, among other hearty out-of-door recreations of the very rich.

There were no women members before 1981, and the current tally is 16 out of 106. This is pathetic. Far more women have been elected president or prime minister of countries all over the globe than have ever served as members of the I.O.C.

More sinister yet was the investment some years ago of millions of dollars to prevent what became known as the Gay Games from adopting and therefore tarnishing the ancient Greek name “Olympic.”

I am sure it can be good for business to win the right to stage the modern Olympics. However, there can be no shame in being rejected by a body as dubious as the I.O.C. Indeed a far, far bigger question mark ought to hang over those supplicants who manage to win its favor.