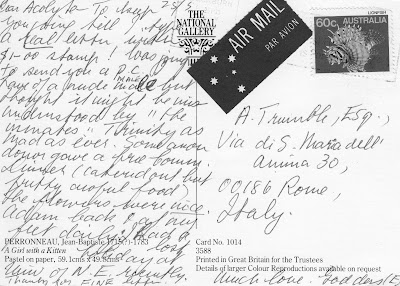 I loved that summer job working for Jean Waller. Her Mollison Library catalogue cards were carefully drafted on slips of scrap paper in the spidery longhand of which I still treasure numerous specimens, mostly cheeky postcards that she sent to me while I was living in Rome, and much later in New York, and Adelaide.

Somewhere along the line by mutual consent there developed between Jean and me the unusual concept of “Earth Goddess” and, at her feet, the groveling slave/acolyte/temple prostitute, a fantasy with which we persisted for many years—and to which latter broad-brush categories other friends gleefully subscribed also. This gave Jean particular enjoyment, and she never failed to reference it in her many cards and letters—typically reporting to me the modest entertainments she enjoyed with mostly Presbyterian friends and relations as “orgies.” Hers was one of the most finely calibrated senses of the ridiculous that I have ever had the good fortune to encounter.

Mostly the catalogue cards required only two or three added entries, and for this purpose I used an exciting putty-colored “word processor” of immense size, which had the capacity to remember the main entry, and allow minor adjustments for printing the added ones. The vast bulk related to specialist works in systematic theology, New Testament studies, philosophy, ethics, and church history—leaning heavily towards the Church of England, this being the diocesan library (overseen by Bishop James Grant). At its height, the process of typing the cards simply barreled along, and each day I returned to Jean’s desk in the Muniments Room a swatch of handwritten slips with the relevant cards for checking. I am proud to say that very few (if any) required correction.

Perhaps it was my impressive performance of this vital task that led, the following summer, to being hired with the beautiful Jeremy Gaden to carry out for Jean and her colleagues Margaret Brown and Helen Brown (no relation) the annual Leeper and Mollison Library stocktake—an immense undertaking that required days of patient shelf-reading. Right through the summer, Jeremy would stand at the top of a tall wooden ladder in those boxy, airless rooms in the Leeper building, wearing, I recall, comparatively tight-fitting shorts, while I did my best to read off the shelf lists (meaning drawers densely laden with cards), performing this function from as advantageously configured a vantage point below. It worked rather well, though I fear we gradually assembled much evidence of pilfering—hardly a credit to the theological students of several generations.

Years later, I came face to face with Jeremy outside a large tent in Adelaide. He was doing the “Roll up! Roll up!” routine in a spangly bowler hat. I’m not sure which of us was more surprised to see the other. “What are you doing here?” I asked. “Ran away and joined the circus,” was his jovial reply, with a full-throated laugh.

In both jobs there was the twice daily ritual of morning and afternoon tea in a corner of the dining hall, to which all the staff of Trinity College repaired at half past ten in the morning and three fifteen in the afternoon—the Warden, Evan Laurie Burge; the director of the theological school, Jeremy’s father John Gaden; Arthur Hills, Frank Henigan, and everyone else. Of these I realize only Frank is still alive.

Arthur was technically the college porter, though upon reflection his role was then and is largely still impossible to describe. He was a genuinely Falstaffian figure, beloved of all students and staff. Between him and Jean, in particular, there existed a lively banter in which Jean gave quite as much and as good as Arthur gave her. From time to time Arthur answered the college telephone, and for sheer, peremptory abruptness—it didn’t matter if you were the Archbishop of Melbourne, or a member of the council—Arthur’s telephone manner was unequaled. When he died, virtually nothing was known or indeed knowable about Arthur’s life, which must have been eventful. He lived in a small room near the laundry, and left behind two or three cashmere sweaters, $6, and nothing else. The rest was almost completely shrouded in mystery, although I imagine Evan must have known considerably more, but for whatever reason chose to suppress it.

In turn, of course, Arthur was the custodian of innumerable secrets imparted over the years by despairing students in the back bar of Naughton’s Hotel, across Royal Parade. There is literally no limit to the number and nature of potentially career-destroying scrapes into which undergraduate law, medical and other students inevitably get themselves, and the beauty of having a wise old Arthur en poste, who enjoyed the complete trust and confidence of the warden, was that ninety-nine times out of a hundred Arthur could somehow get them out of it. To him no doubt more than one puisne judge, suffragan bishop, member of parliament, or cabinet minister today owe their careers, and each and every one of their youthful peccadilloes went with Arthur to his grave, which, incidentally, is under a pretty gum tree on the southeast side of the Bulpadock.