Well, they would, wouldn’t they? 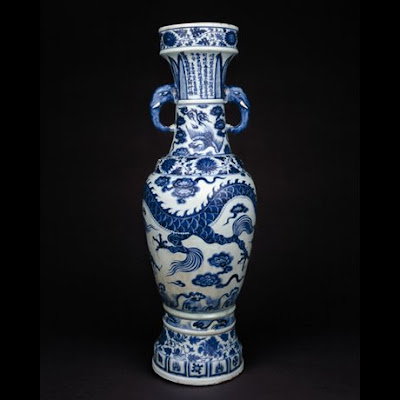 Bad curatorial habits seem to thrive in clusters. In almost every art museum I visited in London last week, on wall labels and in published materials relating to many different types of object, again and again I noticed the same sloppy formulation: Originally this bejeweled Portuguese breast ornament “would have been” pinned or sewn to a gown; “This carriage would have been pulled by a pair of sheep or goats, wearing blue velvet harnesses and bridles with silver buckles as mentioned in eighteenth-century inventories” (both Baroque, V. & A.); originally that rare Chinese vase “would have had” identical rings suspended from its handles (Highlights of the Sir Percival David Collection, Sir Joseph Hotung Centre for Ceramic Studies, The British Museum), and so on.

The glorious little pumpkin carriage for the eldest son of the Elector Max Emanuel of Bavaria, meanwhile, may or may not have been equipped with harnesses of blue velvet and bridles fastened with silver buckles, but it is something of a stretch to base this claim upon documents relating to an altogether different princely court. Here as elsewhere the curator’s quest for the telling detail translates into plain conjecture.

Finally, did the famous Yuan dynasty David vases (above) have rings suspended from their elephant-head handles, or not? If they were exactly like other examples of this shape and type, probably yes, but there is no trace of them, and you have to wonder why, if both were at some point broken, there are inconsistent traces of damage to the relevant parts of those vessels. And it is very hard to see why anyone would run the considerable risk of damage by deliberately setting out to remove them.

Maybe in each case we cannot know; but certainly we can make a reasonably plausible and well-informed guess about what craftsmen aimed for in a more general sense: (1) bejeweled Portuguese breast ornaments of this type were evidently worn pinned or sewn to a gown; (2) Chinese vases of this type were generally equipped with identical rings suspended from each handle.

Everyone wants to apply general principles or knowledge to specific objects, but to do so in English prose by means of the so-called “past unreal conditional” is a solecism because this tense calls for (positively demands) a qualifying phrase beginning with “if,” or the equivalent. Therefore, to get away with this locution, you need to say something like: “These rare Chinese vases would have had identical rings suspended from their handles had they survived the hazardous processes of firing in the kiln, or if for unknown reasons, perhaps of taste, they had not been deliberately removed at a later date, or else accidentally broken.”

All of which gives to the text a decidedly clunky texture that I suppose is best avoided.

I realize some of my colleagues get thoroughly exasperated by some of the smaller bees that find their way into my bonnet, but my gentle response to them is to echo as tactfully as possible the estimable Miss Mandy Rice-Davies who, at the Old Bailey in 1963, in connection with the Profumo scandal, whilst under cross-examination during the trial of Stephen Ward, responding to the risible claim that Lord Astor denied ever having met her, famously remarked from the witness box: “Well, he would, wouldn’t he?”

Something of the same brassy colloquialism has evidently now burrowed its way onto our wall labels and into our catalogue entries, and would have refused to budge if a few of us had not learned to love our inner stickler, and accepted that there are certain limits to what one can definitely say about the original state of very old things.