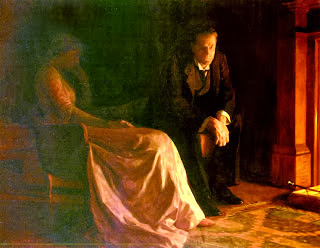 One of the last bays of our exhibition Edwardian Opulence was dedicated to that now forgotten phenomenon the “problem picture,” in other words paintings in which, quite contrary to the academic conventions of Victorian history painting, the moral purpose of the scene or narrative was deliberately occluded. This was also the subject of an excellent essay in the catalogue by Pamela Fletcher. At best these Edwardian problem pictures raised more questions than they answered, and for that very reason achieved widespread popularity. Their meanings were the subject of much speculation in the popular press. I suppose no coincidence, however strange, ought to surprise me these days, yet I was astonished this morning to discover a reference to the problem picture in the concluding portion of a confidential dispatch from Sir Andrew Noble, British Ambassador to Mexico, to the Earl of Home, Secretary of State for Foreign and Commonwealth Affairs, dated Mexico City, October 1960. Not perhaps the most obvious source of light entertainment on a glorious morning in the fall, but the reason for this is that I have been doing a little work on the Castle of Chapultepec in Mexico City, which in 1864 the Emperor Maximilian made his official residence. Anyway, the relevant passage reads:

…The first post abroad in which I served was Rio de Janeiro, almost thirty years ago. In those days the Diplomatic Service regarded Latin America as a jungle, better perhaps than Central Africa, but no more important in the scale of world values. We paid lip service to the importance of the A.B.C. countries, Argentina, Brazil and Chile, largely because of the important British investments, and therefore dividends, to be protected; to be sent to any other Latin-American post was banishment. The Service view was aptly parodied by a small picture hanging in the room of Mr. Collier (now Sir Laurence Collier [1890–1976], the Head of the Northern Department [and sometime British Ambassador to Norway, 1939–50]). This reproduced one of his father’s problem pictures, which showed an older man sitting behind a desk in serious pose; opposite him was a young man clearly struggling with tortured apprehension. The caption below described the older man as the Diplomatic Private Secretary, then master of our postings, and put into his mouth the ominous sentence: “We want a really good man for Bogotá.”

If only I had fastened upon this, much as one might snatch a precious jewel from the dustbin, in time to craft a suitable footnote for the catalogue, or, better, to lob it to Pamela—so that she (and we) could demonstrate the long shelf life of the problem picture, even at the heart of Whitehall. Note that Sir Andrew did not feel it necessary to name Sir Laurence’s artist father, the Hon. John Collier, or indeed to apostrophize “problem picture.” Further evidence, if any were needed, that almost everything is connected and nothing much dwells in isolation.
Posted by Angus Trumble at 1:46 PM