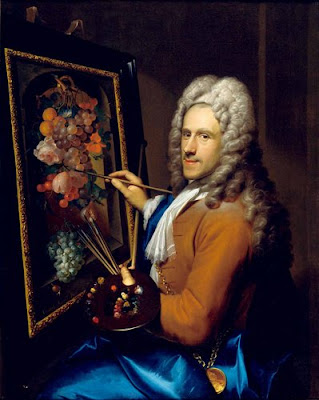 I have been thinking a little more lately about portraiture. One especially interesting sub-category of the genre is portraits of artists by their friends, indeed these have much to say about friendship itself—as does the exquisite double concerto for violin, cello, and orchestra in A minor by Johannes Brahms (opus 102), the composition of which was prompted by the reconciliation of two friends temporarily estranged due to taking sides in a messy divorce, but that is an entirely different story.

Here is a portrait of the eminent Dutch still-life painter Coenraet Roepel by his friend Richard van Bleeck; both artists were born and educated in The Hague. The picture was most probably painted to commemorate Roepel’s appointment in 1716 to be one of the painters attached to the court of the Elector Palatine of the Rhine in Düsseldorf, of which the big gold medal he wears suspended from a long chain was a handsome and very conspicuous token. (The recto of the medal is, of course, decorated with the Elector’s profile portrait.) The sitter is shown executing one of his own paintings, and in a delicious conceit, Roepel himself executed that skillfully foreshortened portion of the canvas, and signed it for good measure.

Still-life paintings of this kind were not merely pleasing aggregations of fruit and flowers, although they certainly could function as decorations on this straightforward level, and often with pleasing seasonal allusions—best contemplated in the depths of winter at the end of the little ice age. However, they could also be ruminations upon the cycle of life: budding, ripeness, over-ripeness, degeneration, and decay—such that the bursting fig, the wilting rose, and the bruised peach will soon be food for snails, and evidently spiders as well—there is a small but conspicuous web. So too men are food for worms. Such was the argument thundered from many Dutch Protestant pulpits.

The handling of Roepel’s palette, specifically the rather unconventional arrangement of his colors, meanwhile, is so specific that it raises the question whether Roepel supplied it also.

His smile combines a hint of mischief and much self-satisfaction, though his eyes are steady, even shrewd.

However—and this struck me as worth pointing out when on Saturday morning I spoke about the painting where it currently hangs at Sperone Westwater Gallery in New York—there is another ingeniously telling aspect of the artist’s disposition. His powdered wig is aspirational, and (along with the rest of his costume) socially ambitious, but Van Bleeck has shown the wig casually pushed back away from Roepel’s brow, perhaps with the clean end of his brush, to let in some air, to alleviate a certain scratchiness, or get it out of the road while he attends to some fine detail maybe up close. One sees very clearly the shaven part of Roepel’s scalp that would normally be covered. It is a delightful detail, and one which also reminds us of the bizarre circularity of habits of fashion.

The powdered wig or perruque, which developed through the seventeenth and eighteenth centuries, began as an approximation of real hair, but the wearing of increasingly elaborate wigs made it absolutely necessary for wig-wearing gentlemen to crop or even shave their hair because unless they did so the wig simply could not be worn. There were also problems of infestation—fleas mainly.

Also, a properly powdered wig, which helped with dubious smells, naturally through the course of the working day deposited a good deal of fine dust over the shoulder parts of a gentleman’s coat, and that phenomenon is very often represented in portraits, as it is here. This is no discoloration of the cloth, or a clumsy misreading of certain effects of light. It’s powder, suggesting that eighteenth-century servants all over Europe must have grappled with a more or less constant film of dust settling unhelpfully on virtually every surface. One wonders whether it also found its way into the paint film. I must ask Mark Aronson.