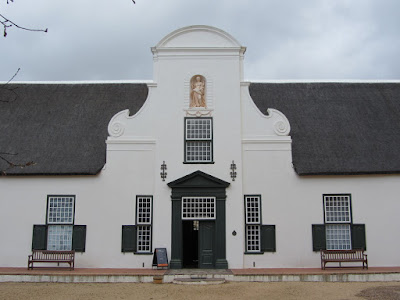 A bright but unflattering sidelight is shed by Captain Robert Percival upon the production, sale, and distribution of the fabled vin de Constance in the neighborhood of Groot Constantia. Captain Percival’s An Account of the Cape of Good Hope (London: C. and R. Baldwin, 1804) was reviewed by “Muir”—paraphrased really—in the Monthly Review in February the following year (pp. 130–143). According to Muir,

“The inferiority of most Cape wines to those of Europe proceeds from no inherent defect in the grapes, but from the slovenly practices of keeping them too near the surface of the ground, mixing both leaves and foot-stalks in the wine-press to increase the quantity of juice, pulling the fruit in an unripe state, checking the fermentation, and employing sulphur and sugar of lead for the purpose of fining. The remarks, however, apply not to the celebrated Constantia wine, concerning which our author has favoured us with some interesting information. The beautiful little village of Constantia and its vine plantations, with the Table Mountain, are considered as the principal objects of curiosity at the Cape:

‘Round the vineyards, dwelling houses, and offices, are pleasant groves of silver-tree, besides oak, elms, and other smaller plants, which completely shelter it in every direction, and hide it from the view till you wind round the hill, and come quite close to it. There are two distinct and separate plantations of vines here, each of a different colour and quality, though both are called Constantia wines. The first farm, called Great Constantia, produces the red wine of that name; and at Lesser Constantia, in its vicinity, the white is made. The farm, which alone produces this richly flavoured wine, belongs to a Dutchman, Mynheer Pluter [sic, his name was Hendrik Cloete] and has been long in his family [sic, the property changed hands twice in 1778, when Mr. Cloete’s father bought it, barely twenty-five years earlier]…

‘The quantity of wine made on the farms of Constantia, on an average, is about seventy-five leagers a year, each leager containing upwards of one hundred and fifty gallons of our measure. It is a sweet, heavy, and luscious wine, not fit to be drunk in any quantity, but chiefly suited to a dessert, as a couple of glasses are quite as much as one would desire to drink at a time. It is even here excessively dear and difficult to be procured, and must be often bespoke a considerable time. The captains of vessels touching here, who have wished to procure a quantity of it, have been frequently obliged to contract for it a year or two before the wine was made.

‘Under the Dutch government [to 1795] the farmer divided the produce into three parts; one-third he was obliged to furnish, at a certain price, to the Dutch East-India Company, who sent it to the government in Holland. Another proportion was furnished to certain of the inhabitants of Cape Town, chiefly the people in high office and power, at the same rate; and the remaining quantity he was at liberty to dispose of at what price he could to the passengers, and captains of ships of all nations. The price to strangers varied according to circumstances; when there was any deficiency in the produce of his farm, the price was always raised in proportion. The Dutch inhabitants in Cape Town, at whose houses and tables the passengers are accommodated, rarely ever produce a drop of this wine, except upon very extraordinary occasions. The Dutch indeed are sufficiently careful never to open a bottle of this valuable liquor at their tables, unless they perceive it may serve their own purposes. A rich Englishman who has made his fortune in India, and from whom they expect a handsome present of tea, sugar candy, or muslin, is honoured now and then with a bottle of Constantia at the dessert; but a British officer who is not supposed to be flush of money or valuable articles, except where he is a favourite with the lady of the house [!], may go without it all the time he remains here.

‘When a bottle of Constantia is to be bought at the Cape Town, which is but seldom the case, and even then it requires some management to procure it, it is never sold under a couple of dollars. But it generally happens that strangers, although they procure this prize, are still as far as ever from tasting real Constantia, as there is another kind of sweet, rich wine, which the Dutch frequently pass off for it.

‘One may fortunately, by dint of persuasion, get at the village of Constantia, from Mynheer Pluter [Cloete], a small cask containing about twenty gallons for ten or twelve pounds sterling; a stranger can seldom procure a larger quantity at the same time; indeed he must always be particularly recommended to take any quantity he can obtain, and also to prevent having the other heavy, sweet wine imposed upon him for Constantia. Mr. Pluter has a great number of visitors to his farm, who are equally attracted by the beauty of the place, and the desire of seeing the vine plantations, with the manner of making the wine. He is in every respect a complete Dutchman. For though used to such a variety of the first company, and gentlemen of high civil, and military situations, who always pay liberally, and whom it is strongly his interest to encourage to his farm by civility, and a suavity of manners, he is generally morose, uncouth, and churlish in his manners; and it is rare to see him in a good humor, though he gains a great profit by entertaining his occasional guests with his nectar. Money is the idol of the Dutch; yet they receive it without thanking those who bring it, or encouraging them to come again by civility and attention; and when they have once received their extravagant demand, they laugh at the folly of our countrymen for their indifference in parting with that money which is their own idol.

‘I was so unfortunate as not to find this gentleman in a good humor during the two or three visits I made to his farm, and could scarcely get a bottle of wine, or leave to look at his wine vaults and presses, not having brought any particular recommendation from his friends at the Cape, which from pride he regularly exacts. I relied however on what I knew of a Dutchman’s partiality for English customers; but on my requesting leave to see the place, he himself came out and informed me the gentleman was not at home. The other officers who were along with me, however, and who understood his disposition better, and the requisite management, got some of the slaves for a present to get us wine, and shew us the plantations and manner of manufacturing the grapes into wine; nor did we take the smallest notice of the owner’s surliness and boorish manners when we afterwards met him, but went on to satisfy our curiosity, and obtain the wine and information we wanted. If company arrives before he is dressed, and has got over his usual quantity of pipes and tobacco, he denies himself, and does not wish to admit them unless he is pretty sure of getting hard dollars; those perfectly acquainted with this, take care to let the slaves see the cash, on which he sends any quantity into an arbor in the garden, and when the bill is called, he charges two Spanish dollars a bottle, equal to 11s. 6d. British. Some allowances must certainly be made for Mynheer Pluter’s [Cloete’s] moroseness, as it is impossible for him at all times to attend to the reception of his visitors; some of whom by their teizing and forward loquacity, might render themselves extremely troublesome and disagreeable to his grave and solemn habits. His slaves are exceedingly attentive and communicative, when allowed to wait on and conduct strangers, finding it highly to their advantage, as they always get something for themselves.

‘Mr. Pluter’s wine vaults are very extensive and neatly laid out, and every thing is in much better order than at any other wine farm I have seen. In the vaults and wine cellars of the merchants at Cape Town, the wine is kept in very large butts or vessels somewhat shaped like a hogshead, but the rotundity is vastly greater in proportion. Those vessels are made of mahogany, or a wood very much resembling it, very thick, highly polished, and kept clean as our dining tables; they are bound round with great brass hoops, and the edges are secured by the same metal, so that no accident or time can damage them. Each of those butts or reservoirs, which they call leagers, though an inapplicable term, as a leager is a measure of one hundred and fifty gallons, will contain from six to seven hundred gallons. The bung-holes are covered with plates of brass hasped down and locked; the cocks are also strong and large, with locks and keys to them, so that the slaves are prevented from embezzling any of the wine, as they are never opened but in presence of one of the proprietors. Some of these leagers are elegantly carved and ornamented with various figures.’”

Captain Percival’s low opinion of Mr. Cloete, and Mr. Cloete’s presumably of each and every officer of the Royal Navy who wished to buy a few bottles of fine Constantia, and to bribe his slaves, were no doubt thrown into high relief by the outcome of the Battle of Muizenberg of 1795, the subsequent demise of the Dutch administration of the Cape, and its replacement by the British—with a brief hiatus between 1803 and 1806, when, under the Treaty of Amiens, the British handed it back to the Batavian Republic. More generally the Dutch colonists could hardly have been expected to entertain uninvited representatives of the new regime with reckless extravagance, or to forfeit a ready supply of their precious Constantia at the obviously unprofitable navy discount. On the other hand, there can be no excuse for serving, and far less selling, counterfeit Constantia—klein or groot.
Posted by Angus Trumble at 2:33 PM