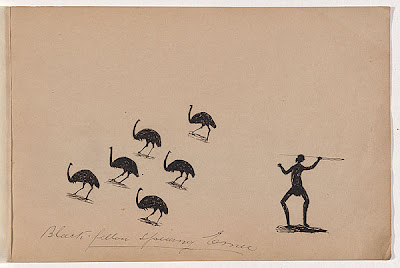 Indigenous Australians have traditionally avoided naming the dead, as much a mark of respect for those who survive them. The taboo is inseparable from spirituality, social usage, and attitudes about kinship widespread among descendants of its original inhabitants in many parts of the continent and offshore, and has today broadened to include a prohibition of the publication, dissemination or display of photographs and other images of the dead. These conventions are not often strictly observed, but are now far more likely to be acknowledged, at least, by means of a warning to aboriginal viewers or readers that they are likely to encounter such references or images—even though they (the conventions) are therefore honoured only in the breach, and almost always by those who are most likely to urge non-indigenous Australians to treat them with the respect they deserve. This is something of a paradox. Meanwhile, as far as I can see there is considerable unclarity about whether these prohibitions were ever meant to be permanent. Certainly the issue of not naming individuals who have died has come to be something of a flashpoint in dialogue between indigenous and non-indigenous Australians, and points to a fundamental difference between our respective attitudes toward the distant past, and about history. Nor is it easily separated from disagreements about collective naming. The Latin-derived terms “aboriginal, adj.” and “aborigines, n.” have now fallen out of favour.

We are for these reasons not likely to see the study of indigenous Australian prosopography flourish any time soon, though nineteenth-century European sources are full of references to named individuals now long dead. I mean no disrespect to anyone by pointing to one of these—as I shall presently—because it brings us back to the issue of collective naming, specifically an old term, “blackfellow,” that is now for obvious reasons pretty much universally regarded with distaste. The matter cropped up in conversation lately with a colleague—we were wondering if that English hybrid could actually have been coined in colonial Australia. The Oxford English Dictionary shows that black-fellow certainly predated first contact and was in common use by 1738, in relation to sub-Saharan Africans. Moreover, the mid-century Australian variants “black-feller,” “black-fellah” and “black-fella” were merely vulgarisms, and had nothing to do with the Arabic fellah (peasant, laborer, bearer), nor any other putative Anglo-Indian origin, which had occurred to us as at least a possibility. However, what surprised me most when at length I double-checked my copy of Austral-English: A Dictionary of Australasian Words, Phrases and Usages, by Edward E. Morris (London and New York: Macmillan, 1898, p. 33) was that his earliest reference to “blackfellow” occurs in Discoveries in Australia by J[ohn]. Lort Stokes (London: T. and W. Boone, 1846, vol. 1, p. 74): “The native Miago, who had accompanied us [aboard H.M.S. Beagle] from Swan River [Perth, Western Australia], was most earnest in his inquiries about the savages, as soon as he understood that some of them had been seen [on January 18, 1842]. He appeared delighted that these ‘black fellows,’ as he calls them, have no throwing sticks;…” The italics are mine. Obviously this comes much later than the earliest current reference in the OED to “black-fellow,” meaning specifically an Australian Aborigine (Collins, 1798), and, despite Commander Stokes’s implicit suggestion that this man actually coined it, the term was evidently by then well enough established in Perth to be learned and used by indigenous English-speakers. It seems strange that Stokes was apparently neither aware of this, nor at all familiar with the term.

Posted by Angus Trumble at 1:42 PM