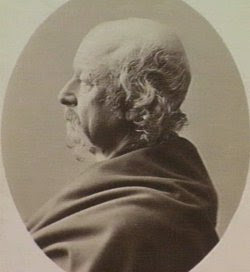 I have lately finished a brief article about Richard Henry Horne, one of the battiest and most colourful Victorians who ever lived. His first poem was published in London when King George IV was still on the throne, and his last in New York when the future George V was a midshipman in the Royal Navy. Some time in the third quarter of 1867 Horne added the name “Hengist” to his existing ones, and on Tuesday, November 26, presented a card inscribed “R. H. Hengist Horne” at the enormous levee held at the Exhibition Building in Melbourne in honor of Queen Victoria’s second son Prince Alfred, Duke of Edinburgh, who was just then visiting the colony aboard H.M.S. Galatea (see Argus, Wednesday, November 27, 1867, p. 5.) Nobody knows why Horne alighted upon the name of Hengist, although the hazy origins of Hengist and Horsa, the mythical Saxon invaders of Kent, were fodder for antiquarian Church of England clergymen with time on their hands, and therefore regularly cropped up in the columns of Notes and Queries (2nd series, No. 22, May 31, 1856, p. 439; No. 25, June 28, 1856, pp. 517–518; No. 61, February 28, 1857, p. 170; Vol. 11, March 2, 1861, pp. 171–172; 3rd series, Vol. 7, January 21, 1865, p. 64). Long ago, referring to Horne, W. M. Hurry of Sydney, N.S.W., explained: “In the Australian bush he had met a Mr. Hengist, whose name he took” (Notes and Queries, April 18, 1931, p. 286). In due course Horne made it known that that fugitive gentleman actually saved his life, but no specifics have ever come to light. It is safe to assume that this was one of Horne’s crazy inventions. Prompted in this direction by my excellent colleague Gerard Hayes, of the Australian Manuscripts department of the State Library of Victoria in Melbourne, I wondered if when Lewis Carroll has the Mad Hatter and the March Hare re-appear as Anglo-Saxon messengers named Hatta and Haigha (rhymes with mayor), this was in fact a joke at Horne’s expense, but the chronology does not work. Through the Looking Glass (1865) appeared at least two years before Horne alighted upon Hengist, but Carroll was evidently satirizing the same Victorian fascination with primitive Britain that Horne took almost as seriously as himself. Having added Hengist to his existing names, very soon Horne dropped the middle name of Henry, and thenceforth signed himself Richard Hengist Horne. Thus after seventeen years in Australia he reappeared in London, with an apparently serious proposal to represent H.M. government in some sort of consular capacity in Japan.

Posted by Angus Trumble at 6:37 AM