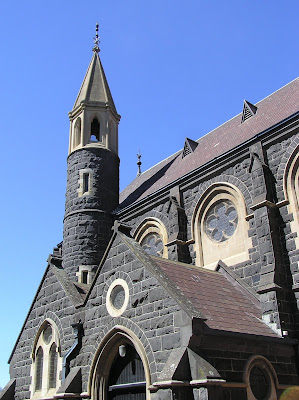 Not many things make me really angry, but this morning’s perusal of the old Melbourne Church of England Grammar School reports has brought me to the point of apoplexy, never a good thing. In the House Master’s Report for the third term of 1978, my first year at the senior school in Domain Road, South Yarra, the following relatively brief summary remarks were signed by “R. Hallo” and “A. J. Smith”: “An excellent academic start has been made which augurs well for the future. His hard work certainly deserves the success he has enjoyed. He has an obvious contribution to make to the library and music. However he must make a real effort with the main problem he has faced this year, that is, developing better and lasting relationships with boys of his own age.” At that time I was fourteen, and scarcely even beginning to go through puberty. Throughout the previous three terms I was subjected to physical and emotional abuse of almost unbelievable severity—including but not limited to sexual assault, battery, imprisonment, mental torture, and an orchestrated program of excoriation, belittlement, and ostracism, wherein one day the boy whom I then regarded as my closest friend casually announced to me in the school parking lot that upon the advice of his own father, a sometime lord mayor of St. Kilda, he had come to the conclusion that my friendship was so damaging to his own reputation that it must henceforth cease entirely, and cease it did. David never spoke to me again, and I do not know what has become of him. The lasting effect of all those things on an adolescent boy never quite go away, but I guess thirty-two years later I have built a viable sort of life despite them. Books, art, and music were my refuges at school, such as they were. But I do not know, and nor now can I ever know, what on earth my deeply worried parents ever made of these House Masters’ view that I “must make a real effort with…developing better and lasting relationships,” as if this were something over which I had any control, or for the lack of which any shy fourteen year-old might actually be blamed. On the whole, better and lasting relationships prosper when you are not being beaten, or having your head pushed down a lavatory in the tog-rooms, or being stuffed into a locker and left there for a good long while. These schoolmasters were in a far better position to stop the abuse and punish the bullies than I ever was. To be fair, schoolboys are as cunning as they are cruel and dangerous, and I would hazard a guess that Messrs. Hallo and Smith actually knew very little about what was going on right under their noses. If they did know, they chose to do nothing about it. I am not sure which is the more damning form of negligence. Poor Mum: She and Dad encouraged me to think seriously about moving to a different school, but such was my state of mind then that I recall thinking that if it was bad at this elite breeding ground of Australian peers, prime ministers, and bishops—I had no points of comparison—then how much worse might it end up being somewhere less distinguished? I suspect they may have felt the same, however misguided was their apparently infinite trust in the wisdom of the school authorities. Simply incredible, and regrettably that is where all of us left the matter. I soldiered on, and survived the ordeal. But how many other boys were not so lucky?